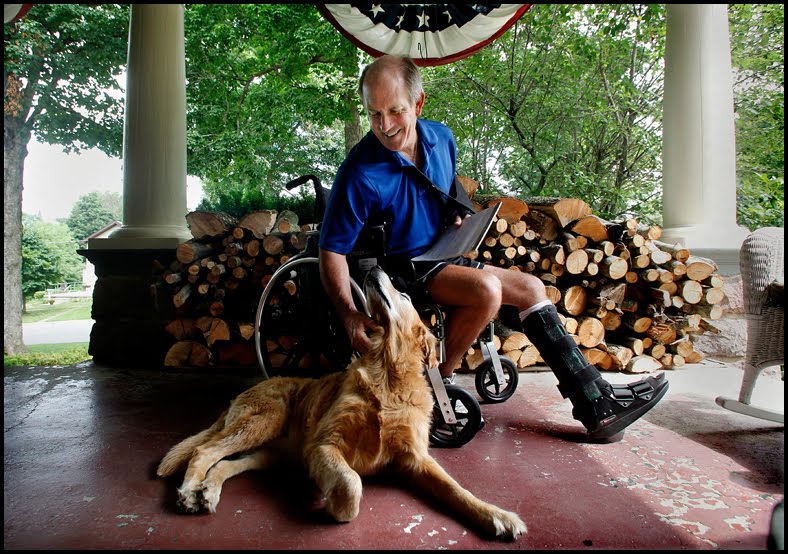 Tom Rademacher, a columnist whose words have pulled on so many hearts (including mine), is recovering from an accident in June when he broke his left ankle, elbow, and wrist. Tom has recently won the National Society of Newspaper Columnists top honor for general interest, large newspapers, for the second year in a row. When I asked Tom if he would be writing about his accident and recovery road he looked wistful and simply said the experience makes him want to write about the people who truly have to start over, and the doctors who help them. (Grand Rapids Press Photo0

Great portrait of him Em! I wish I would have met him while I was at The Press. His article were always some of my favs…

I simply want to say I am just all new to blogging and definitely liked this blog site. More than likely Iâ€™m going to bookmark your website . You actually come with exceptional articles. Cheers for sharing your web site.

Aw, this was an incredibly nice post. Finding the time and actual effort to produce a good articleâ€¦ but what can I sayâ€¦ I hesitate a whole lot and don’t seem to get nearly anything done.

Iâ€™m amazed, I have to admit. Seldom do I encounter a blog thatâ€™s both educative and entertaining, and let me tell you, you have hit the nail on the head. The issue is something too few people are speaking intelligently about. Now i’m very happy that I came across this during my search for something concerning this.

Spot on with this write-up, I honestly believe that this site needs a lot more attention. Iâ€™ll probably be back again to read more, thanks for the information!

Creative writing copywright: How to protect work when submitting to potential publishers or literary agents?

Iâ€™m impressed, I have to admit. Seldom do I come across a blog thatâ€™s both equally educative and interesting, and let me tell you, you have hit the nail on the head. The issue is an issue that too few folks are speaking intelligently about. Now i’m very happy I came across this in my hunt for something concerning this.

How can I get Firefox 3 to stop logging me out everytime I close the browser?

I work for a small business and they don’t have a website. What is the easiest, cheapest way to start a professional looking website?.

My friend and I have been discussing personal blogs and online journaling. She feels that personal feelings and such should not expressed in such open forums. I see no problem with it. Share your thoughts:. 1. Do you blog or journal?. 2. Do you prefer face to face expression of feelings over written communication?.

How do I convert my website from dreamweaver to wordpress?

How to change the preferences on a secondary Tumblr blog?

Does anyone know of a good site offering tutorials in customising blogspot/blogger skins? I’m a total novice who doesn’t know anything about HTML. Help!.

How to apply for google adsense account for my all 3 blogs and 2 websites ?

I’m looking to spike my journalistic career and thought that a blog might be a good idea. But I also know that there are ways to set up a paypal account attached to the blog for payment to read it or donate. I guess I was inspired by the movie Julia and Julie and I want to do it on my own. Any ideas on how to get started?.

What is a blogging site that allows you to sync with facebook for comments?

So I’m obviously new to the site. I figured out how to customize my blog page but now I need some help learning how to delete the posts that seem to automatically be there as examples and create my own..

The very next time I read a blog, I hope that it does not fail me just as much as this particular one. After all, I know it was my choice to read through, however I truly thought you’d have something useful to say. All I hear is a bunch of whining about something that you could possibly fix if you were not too busy searching for attention.

Details From an Electronic Music Festival